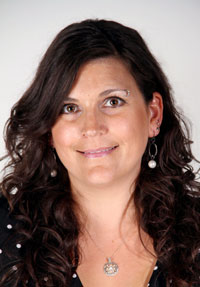 “This is an exciting time to be a Solar System Ambassador—NASA is preparing for the Artemis missions that will send astronauts to inhabit the Moon and then Mars for extended periods,” Dr. Demaree commented. “NASA has also recently developed innovative classroom materials to help educators communicate the excitement of space exploration to school children and to adults.”

Dr. Demaree first became involved with NASA through a program of summer institutes that the space agency held for teaching credential students. For several years, she served as the faculty sponsor for a group of Notre Dame de Namur students who took an intensive five-day summer training at NASA’s Ames Research Center in Mountain View. Dr. Demaree attended the sessions with her students and supervised them as they learned about lesson plans that taught cutting-edge science using fun activities.

“One lesson in the NASA curriculum that the students really enjoy is learning about craters,” she describes. “You fill a container with flour, and then coat it with chocolate powder to represent the surface of a planet. Then the students drop objects into the container from different heights and angles to see how meteors form craters, and how even a relatively small object can displace an enormous amount of material. It helps explain how the dinosaurs became extinct, for instance.”

Dr. Demaree hopes to bring lessons like this to local elementary school classrooms and to public events in the San Francisco Bay Area. She intends to hold a NASA-related community event in the near future on the Notre Dame de Namur University campus.

“One aspect of STEM education that NASA is focusing on now is the engineering component,” she elaborates. “How do you build a lasting, human habitat on Mars, for example? The idea is to apply the concepts you learn in science to practical problems, which is what engineers do. If you’re designing a habitation for another planet, you have to think systematically—once you’re on Mars, you can’t just run to the nearest grocery store.”

← Braving The Bohemian: Editing a College Literary/Arts Magazine
From Manila to the San Francisco Bay Area: An International Student’s Dream →