One alumna’s journey from immigrant to fighter and advocate for an underrepresented group that is challenged even more so since COVID-19. 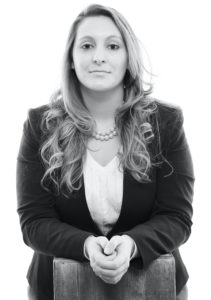 Born in Brazil, Fernanda Bueno immigrated to the United States at the age of 16. She facedevery hardship expected as a foreigner and non-English speaker, which motivated her to help other immigrants have an easier journey than she did.

She now leads a team of immigration warriors, fighting tirelessly for victims of domestic violence, the LGBTQ community, and refugees. She speaks loudly for those who do not have a voice, and stands tall between her clients and the deportation machine. Hear her story…

How COVID-19 has affected my field

The immigration field has been hit hard by COVID-19. Most of our clients are from the Latino community and considered essential workers, which means that a lot of them were exposed to the virus and eventually tested positive. We had to close our physical office, send our employees home, and do all of our work remotely because we still had to honor our deadlines for client eligibility. This change was especially challenging because many of our clients are indigenous, have no access to any sort of technology, or simply live in a crowded environment where it becomes impossible to have a confidential conversation. A lot of them are unable to read, which makes emailing or texting impossible. Many do not have a computer or a smartphone, so even simple things like sending a picture of a document were challenging.

Additionally, this administration’s response to COVID-19 was to essentially shut down our borders and stop the issuance of documents that had been previously approved. This placed an immediate hold on our family cases and all of our clients who had been waiting for employment authorization or a green card. So clients who had been waiting for years for a chance to come in legally were now told that they were banned until further notice.

We have been blindsided by several changes in immigration law recently, and we’ve had to work around the clock to push our cases through before our clients became ineligible for immigration benefits. This was especially hard because clients were not allowed to come in physically, and our team was not able to work as fast as we needed to.

Clients lost their jobs due to the pandemic, and were afraid of asking for any unemployment benefits because, earlier this year, we had a new public charge rule come into effect. This rule essentially punishes any immigrants who have applied for a public benefit. Under this rule, being unemployed is also a heavy negative factor, which unfortunately became a challenge for most of our clients.

Our clients were sick, unemployed, unable to ask for any financial help, unable to meet with their attorney to prepare their case, and forced to magically meet deadlines before this administration changed the rules on us yet again. Internally, dealing with the constant changes in the law while handling a full caseload and surviving a global pandemic definitely took a toll on our team.

What my NDNU experience meant to me and my career

When I came to NDNU, I had recently moved from my home country of Brazil, and NDNU became the only home that I knew. It was at NDNU that I learned English, formed my political opinions, and discovered that helping my immigrant community was my calling in life. Had I not been encouraged by my advisor, the magnificent Stephen Cole, to read the Amnesty International magazines outside of his office, I might not have become an immigration attorney. His ability to recognize that inclination in me has allowed me to touch the lives of thousands of people. I was also taught by Ali Ferdowsi that, as members of a community, we become co-responsible for the well-being of all. That we must speak up for those who can’t speak for themselves in times of need, and that remaining quiet, though comfortable, is rarely the right thing to do. Every now and then in my profession, I am given a choice between doing a mediocre job and working a lot harder to become excellent. It is because of my NDNU education that I have always chosen excellency.

During my first year at NDNU, my English was extremely limited and I spoke with a heavy accent, which made me incredibly self-conscious. One day, I met with Professor Ferdowsi (also an immigrant) and I mispronounced a word, and he gently corrected my pronunciation. I immediately fell back on my chair drowning in shame. Seeing that I was uncomfortable, he said “don’t be ashamed. The fact that you have an accent means that you speak more than one language. And the more languages you speak, the more I like you.” That was a defining moment for me. A moment of acceptance and camaraderie that allowed me to become unafraid and unapologetic about who I was.

← Improving Patient Care and Safety during COVID-19: A Note from Patrice Callagy